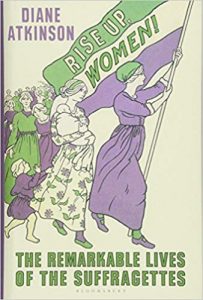 On 6 February 1918, after campaigning for over 50 years, British women were finally granted the vote. In November 1919, the first woman MP, Lady Nancy Astor, was elected to the House of Commons. History was made.

A hundred years on, it is time to reflect on the daring and painful struggle women undertook to break into a political system that excluded them. In the voices of key suffragettes, Rise Up Women! chronicles the founding of the National Union of Women’s Suffrage Societies in the 1860s, led by Millicent Garrett Fawcett, and the formation of the more militant Women’s Social and Political Union in 1903.

‘Deeds Not Words!’ was their slogan – and they took increasingly violent action, enduring police brutality, imprisonment and force-feeding. Charting the history of the movement through the lives of those who took part, Rise Up Women! illuminates the stories of lesser-known figures and depicts a truly national and international struggle. Brilliantly researched, vividly rendered and celebratory, it is an essential reminder of what it took to get where we are today – and the progress yet to be made.