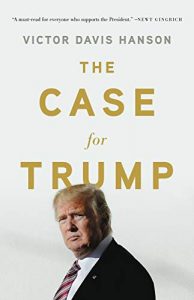 An instant New York Times bestseller: From an award-winning historian and regular Fox contributor, the true story of how Donald Trump has become one of the most successful presidents in history — and why America needs him now more than ever
In The Case for Trump, award-winning historian and political commentator Victor Davis Hanson explains how a celebrity businessman with no political or military experience triumphed over sixteen well-qualified Republican rivals, a Democrat with a quarter-billion-dollar war chest, and a hostile media and Washington establishment to become president of the United States — and an extremely successful president.
Trump alone saw a political opportunity in defending the working people of America’s interior whom the coastal elite of both parties had come to scorn, Hanson argues. And Trump alone had the instincts and energy to pursue this opening to victory, dismantle a corrupt old order, and bring long-overdue policy changes at home and abroad. We could not survive a series of presidencies as volatile as Trump’s. But after decades of drift, America needs the outsider Trump to do what normal politicians would not and could not do.
Victor Davis Hanson
The book "The Case for Trump" has readim!!!
» » » Read the readim » » »
You might also like Biographies & Memoirs

The Spy and the Traitor: The Greatest Espionage Story of the Cold War

NEW YORK TIMES BESTSELLER “The best true spy story I have ever read.”—JOHN LE CARRÉ The celebrated author of Double Cross and Rogue Heroes returns with his greatest spy story yet, a thrilling Americans-era tale of Oleg Gordievsky, the Russian whose secret work helped hasten the end of the Cold War. If anyone could be considered a Russian counterpart to the