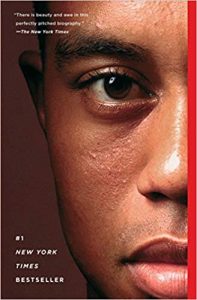 “Irresistible…Immensely readable…The authors have laid out a saga that is part myth, part Shakespeare, part Jackie Collins….A whirlwind of a biography that reads honest and true.” —The Wall Street Journal

“A confident and substantial book…It has torque and velocity…It makes a sweet sound, like a well-struck golf ball. I found it exhilarating, depressing, tawdry, and moving in almost equal measure. It’s a big American story.” —The New York Times

Based on years of reporting and interviews with more than 250 people from every corner of Tiger Woods’s life—many of whom have never spoken about him on the record before—a sweeping, revelatory, and defining biography of an American icon.

In 2009, Tiger Woods was the most famous athlete on the planet, a transcendent star of almost unfathomable fame and fortune living what appeared to be the perfect life. Married to a Swedish beauty and the father of two young children, he was the winner of fourteen major golf championships and earning more than $100 million annually. But it was all a carefully crafted illusion. As it turned out, Woods had been living a double life for years—one that unraveled in the aftermath of a Thanksgiving-night car crash that exposed his serial infidelity and sent his personal and professional lives over a cliff. Still, the world has always wondered: Who is Tiger Woods, really?

In Tiger Woods, Jeff Benedict and Armen Keteyian, the team behind the New York Times bestseller The System, look deep behind the headlines to produce a richly reported answer to that question. To find out, they conducted hundreds of interviews with people from every facet of Woods’s life—friends, family members, teachers, romantic partners, coaches, business associates, physicians, Tour pros, and members of Woods’s inner circle.

From those interviews, and extensive, carefully sourced research, they have uncovered new, intimate, and surprising details about the man behind the myth. We read an inside account of Tiger’s relationship with his first love, Dina Gravell, and their excruciating breakup at the hands of his parents. We learn that Tiger’s longtime sports agency, International Management Group (IMG), made $50,000 annual payments to Tiger’s father, Earl Woods, as a “talent scout”—years before Tiger was their client. We discover startling new details about Earl, who died in 2006 and to this day lies in an unmarked grave. We come along as Tiger plunges into the Las Vegas and New York nightclub worlds alongside fellow superstars Michael Jordan and Charles Barkley. We are whisked behind the scenes during the National Enquirer’s globetrotting hunt to expose Tiger’s infidelity, and we get a rare look inside his subsequent sex-addiction treatment at the Pine Grove facility in Hattiesburg, Mississippi.

But the portrait of Woods that emerges in Tiger Woods is far more rewarding than revelations alone. By tracing his life from its origins as the mixed-race son of an attention-seeking father and the original Tiger Mom—who programmed him to be “the chosen one,” tasked with changing not just the game of golf but the world as well—the authors provide a wealth of new insight into the human being trapped inside his parents’ creation. We meet the lonely, introverted child prodigy who has trouble connecting with other kids because of his stutter and unusual lifestyle. We experience the thrill and confusion of his meteoric rise to stardom. And we come to understand the grown man’s obsession with extreme training and deep sea diving—despite their potential for injury—as a rare source of the solitude he craves. Most of all, we are reminded, time and time again, of Woods’s singular greatness and the exhilaration we felt watching an athletic genius dominate his sport for nearly twenty years.

But at what cost? Benedict and Keteyian provide the answers in an extraordinary biography that is destined to become the defining book about an authentic American legend—and to linger in the minds of readers for years to come.

An Autobiography or The Story of My Experiments with Truth

“My purpose,” Mahatma Gandhi writes of this book, “is to describe experiments in the science of Satyagraha, not to say how good I am.” Satyagraha, Gandhi’s nonviolent protest movement (satya = true, agraha = firmness), came to stand, like its creator, as a moral principle and a rallying cry; the principle was truth and the cry freedom. The life of Gandhi has